Bernard Plossu visited Rome on numerous occasions between 1970 and 2005. Three hundred and forty photographs tell of the emotions of this travelling photographer.

“All roads lead to Rome”, recalls Bernard Plossu, an eternal lover of the eternal city. To express a passion such as his, a great book was required! And this is achieved with this 320-page two-colour volume, published in French and Italian with the support of the Almayuda Foundation, with a preface and introductory remarks written by the author himself, as well as Alain Bergala and Patrick Talbot.

The story begins in the early 1970s. “… travel to Rome en route to Naples and Positano. It was winter, the rain was torrential. I had a 24-mm wide-angle lens on my old Nikkormat. I messed up every shot and burned the negatives!”

But this was just a temporary setback. “I returned in 1979, having decided to use nothing but a ‘standard’ 50-mm lens, which doesn’t distort things and hence is closer to reality.” The vast horizontal and silent landscapes of the high plateaus of Taos in New Mexico, where he was living at the time, and the noisy verticality of the Italian capital clashed visually and complemented each other. And they shared something in common: the discreet force of the 50-mm lens!

His approach became consolidated: “Everything taken with the 50 mm in black and white, no effects allowed, just a pure, classical vision – modern, in other words. Somewhere, a tribute to the painter Corot, who I regard as classical, modern.”

A need for Rome!

“Rome draws me constantly, and I go almost every year and I take photographs in a disorderly manner, nothing systematic or organised about them whatsoever.” Bernard Plossu

His visits increased. “Rome draws me constantly, and I go almost every year and I take photographs in a disorderly manner, nothing systematic or organised about them whatsoever. No strategy, just the enormous pleasure of being there and taking photos at random. Yes, that’s it, photographic wanderings! Neighbourhood by neighbourhood, heeding only my instincts and especially my passion: I love this city deeply! I have an irresistible need for Rome still and always!”

He went there on his own or with groups of friends. He stayed in small hotels near the train station or the Campo de’ Fiori. What does he especially like? “In the city centre, there are still small grocery stores, trattorias, a human life with people to talk to… No need for a car, it’s ideal! Between 1979 and 2009, nothing changed. It felt to me like I was always making my way around the SAME city, despite the 30 years’ time difference. Every time I arrived by train from Nice or Toulon, I had the same sensation: ‘I’m in Rome!!!’”

The years passed and he realised he had amassed a veritable body of work on Rome. He started to arrange the images into possible two-page spreads. Every year, he accumulated a few more. That was when the idea for a book began to form, but not just any book. “A great tome, a slice of life, a major assemblage, a metaphysical tribute to this extraordinary city! This book came into being over time. Might it be time alone that enabled me to make of it exactly what I wanted? Rushing would have been a big mistake!”

Not just any book!

If you ask Bernard Plossu which photos in the book he finds most striking, the first ones he mentions are the shots taken at Villa Giulia, the Etruscan museum he loves. Among them is the photo of this vase “a bit blurred, which has proved successful, as it was chosen to illustrate Anne Bony’s book on the 1980s. Why does this photo work so well? I don’t know, undoubtedly it’s to do with the focal length.” 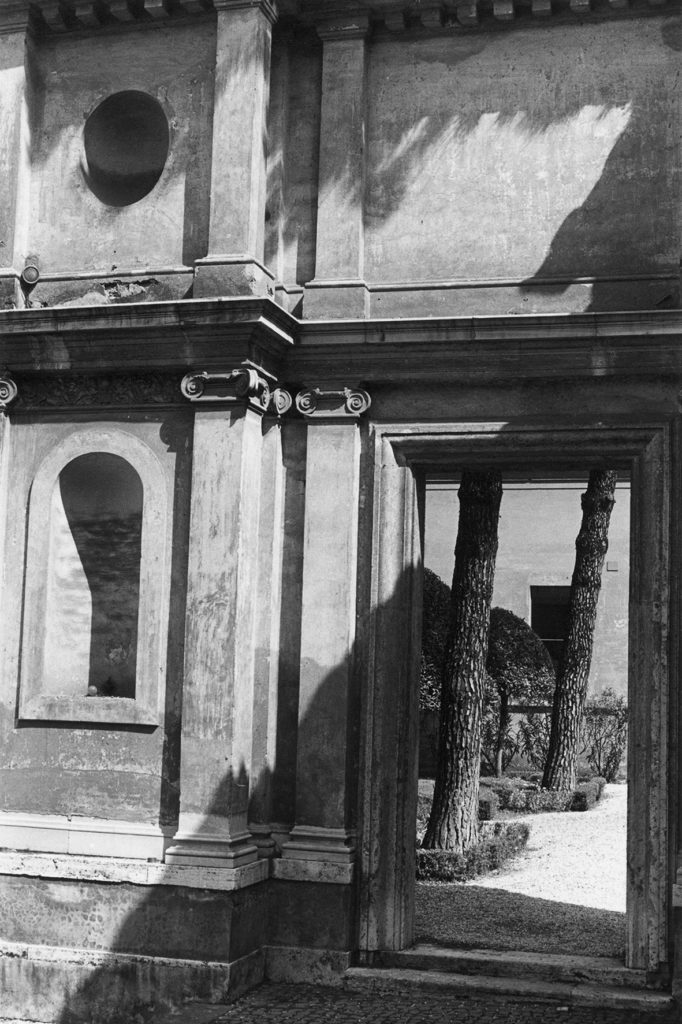 The other image he wanted to use for the book cover was also taken at Villa Giulia. “It shows a door to the side with trees in the background and shadows that make the photo very much in the style of De Chirico.” And that is the purpose of this book on Rome: to show that it is a totally ‘metaphysical’ city. 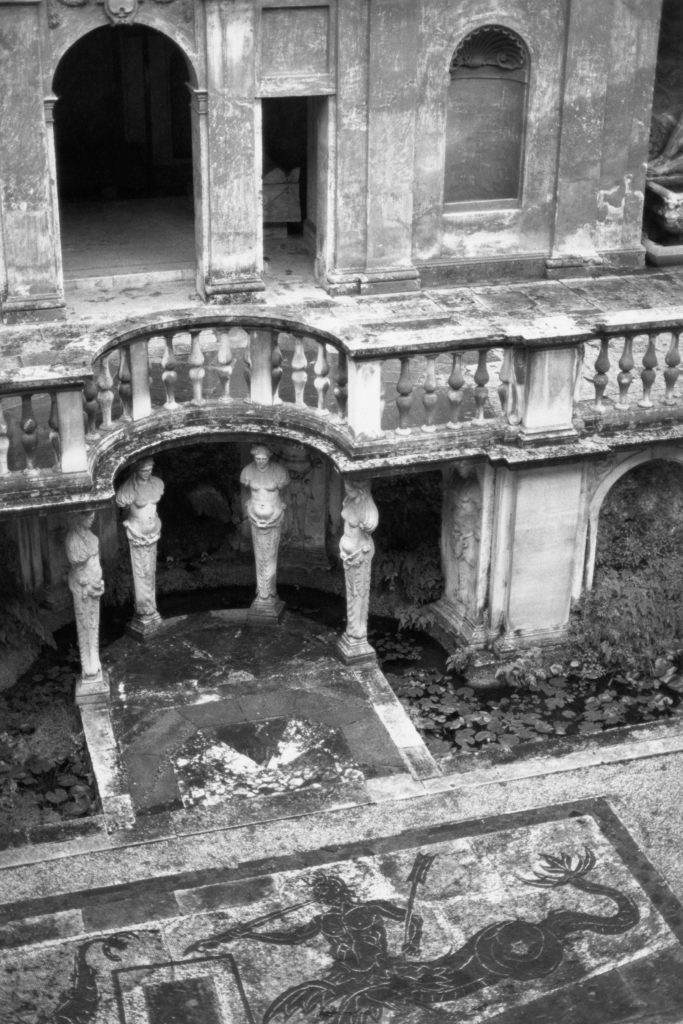 In this, he was influenced by the paintings of the Scuola Romana movement and by painters like Mafai, Scipione and others. “Even in the photos of modern life, this language endures. And there are also these double-page spreads which tell a story on their own.” 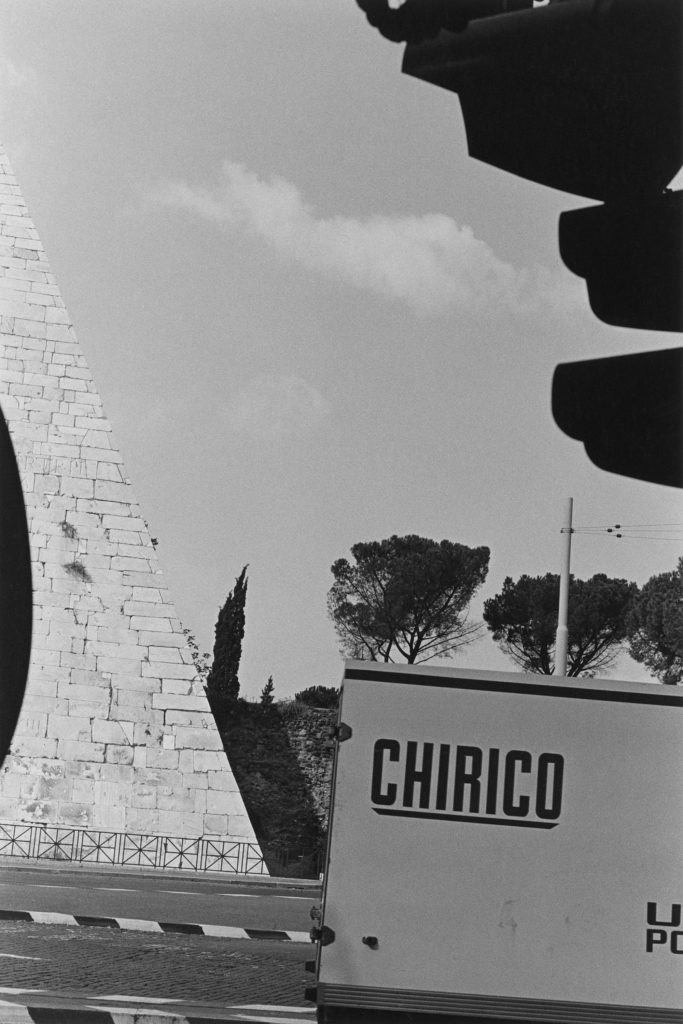 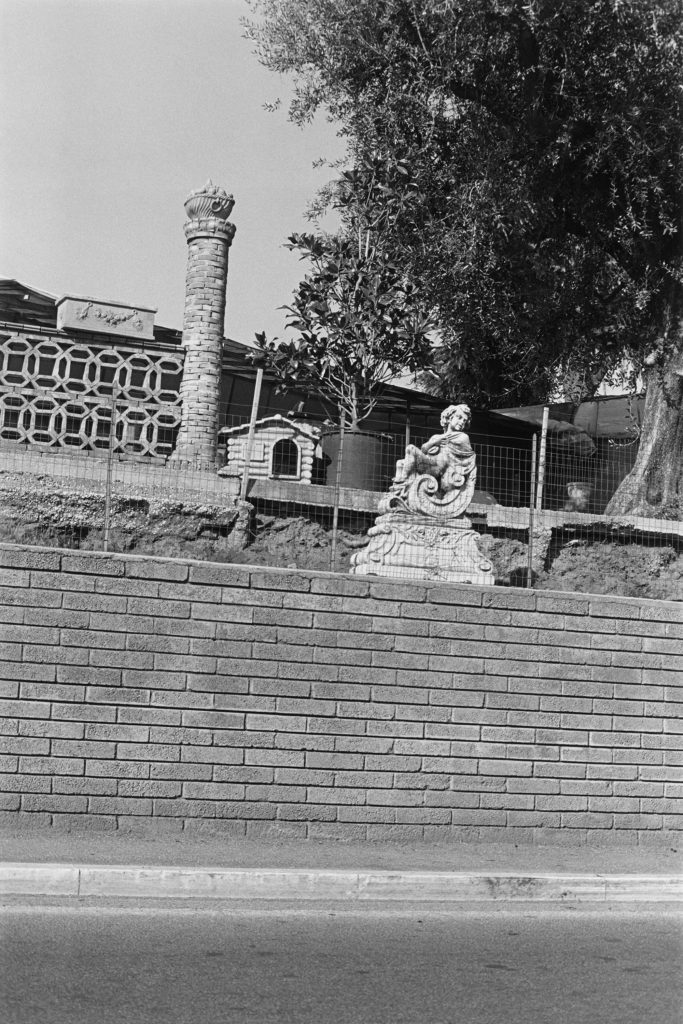 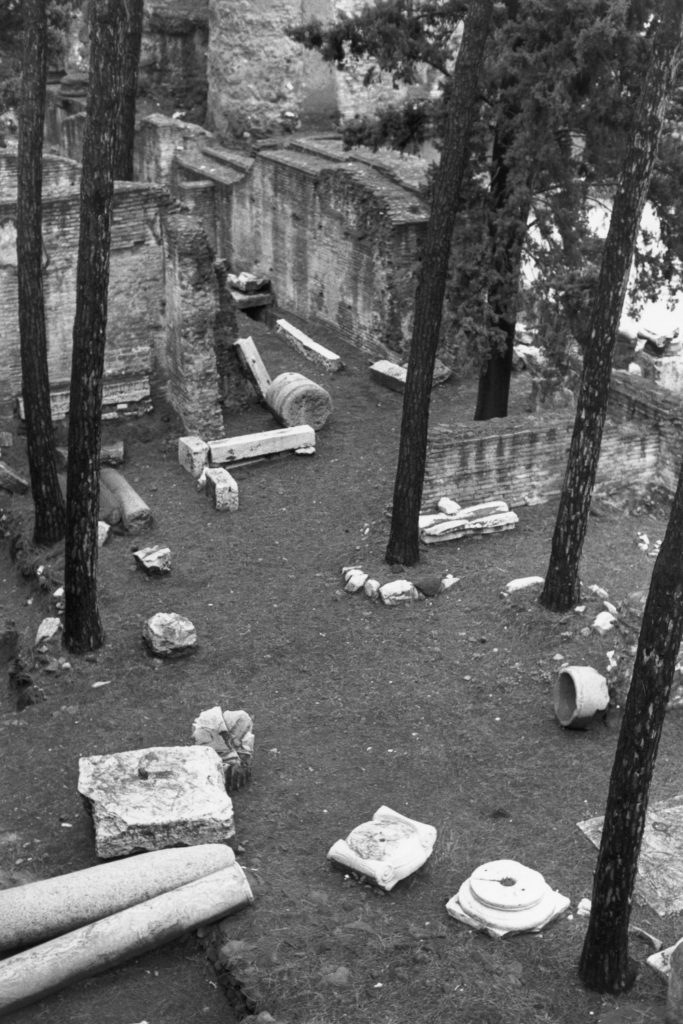 Will he return to Rome, if only to see whether the city has changed? To this last question, Bernard Plossu answers with a heartfelt cry: “YES, I still have a need to go there and I would also like to discover the surroundings, the countryside, Cervara di Roma…” 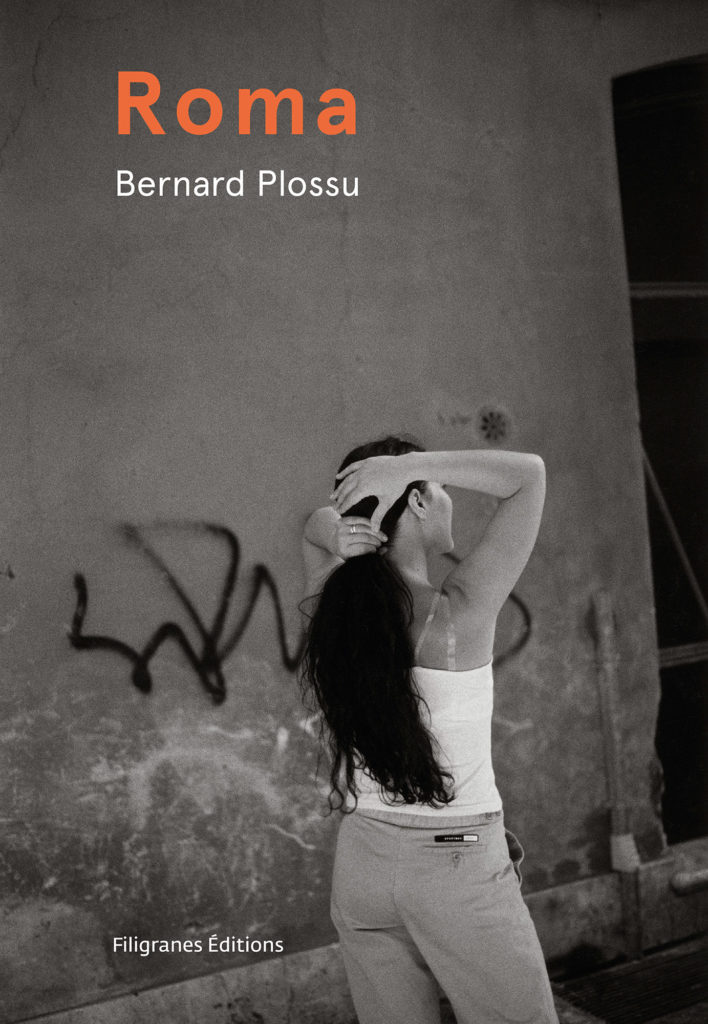 Bernard Plossu is one of the great photographers of our times. He was born in the south of what is today Vietnam. Over the course of his life, he has traversed the Sahara, the Americas and Africa. His work is influenced by the Beat Generation and by his long and solitary walks, the first of which he took in the 1980s. His interests include poetry, westerns and Nouvelle Vague films, which he discovered at the Cinémathèque Française in Paris in his youth. The nomadic Plossu lived in California, in the high plateaus of New Mexico and in Spain before making his home in La Ciotat in 1992. Coming after Plossu Cinéma, Maroc 1975, Carnets d’inédits, Jardin de pierres and La Montagne Blanche, Roma is the sixth collaboration between the Almayuda Foundation and Bernard Plossu, whom the foundation has been supporting for many years.