kanthari (with a lower case letter!)

kanthari trains and mentors change makers from all around the world and of all ages and backgrounds in Kerala (India), equipping them with the skills they need to set up NGOs and social purpose businesses.

Every year, kanthari trains over 20 agents of social change at its campus in Kerala (India). People from all over the world who share a strong desire to bring about radical and innovative social and ethical change in their home community. Almayuda supports kanthari, which invests in these actors keen to transform society.

Initially called the “International Institute for Social Entrepreneurship” (IISE), kanthari is a teaching and training institute housed in an eco-friendly campus building at Thiruvananthapuram (Kerala). kanthari was founded in 2005 by Sabriye Tenberken and Paul Kronenberg as an extension of the pioneering project “Braille Without Borders”, based in Lhasa (Tibet). 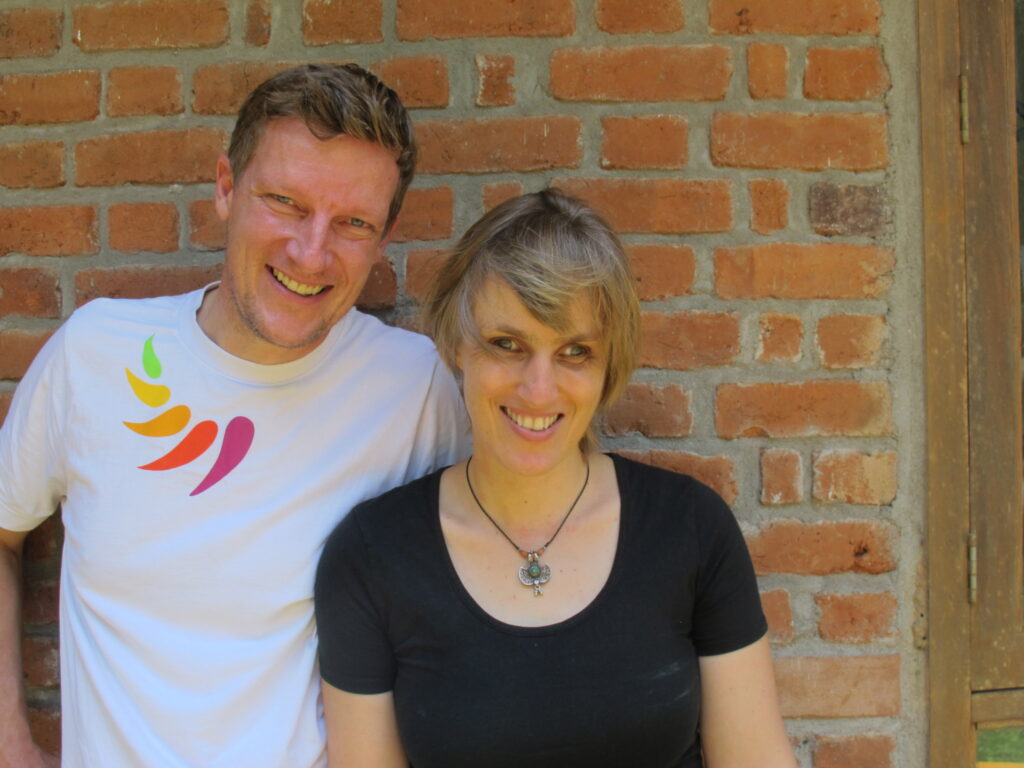 Sabriye Tenberken is German. Blind from the age of twelve, she developed the Braille script for writing in the Tibetan language after studying Central Asian Studies at Bonn University, where she specialised in Tibetology. Paul Kronenberg, her life and project partner, is Dutch. He studied mechanical engineering, computer science, business technology and the science of communication systems before working for a number of NGOs in Africa, Asia and Eastern Europe.

Sabriye and Paul set up the IISE to support people who have overcome major challenges or adversities in their lives, such as disability, poverty, war, discrimination and exploitation, preparing them so they can mount their own project in the form of an NGO or social purpose business. It is on behalf of these modest people, capable of changing society if they are helped to equip themselves for the task, that they decided to rename their project ‘kanthari’ after a small but extremely spicy chilli pepper that grows wild in Kerala.

The kanthari, which Sabriye and Paul always write with a lower case k to reflect the flat hierarchy with which the organisation work, contrary to the norm, is the symbol of a new type of leader, one on the fringes of society who, like the chilli pepper, has fire within them.

Twelve months to get ready!

To join one of the intakes of 20-25 participants trained each year at the kanthari campus, applicants must be at least 22 years old and demonstrate a determination to bring about social and ethical change in their home community. Participants also need to have sufficient knowledge of English and, basic computer skills. In contrast, nationality, religion, disability and diplomas are not factors that influence the selection of candidates who, if they are successful, will find their accommodation costs and training fees fully covered by grants funded by donors.

Over the 12-month programme (Seven months on campus plus five in the field),  participants receive training on every aspect that will make a difference to the success of the creation of an NGO or social purpose business: from project management to fundraising and including computer skills, public speaking and leadership, governance,  accounting and administration, planning and problem solving, marketing and communication.

The teaching is intensive and hands-on. The courses and workshops are led by people called ‘catalysts’ in the kanthari vocabulary. These experienced individuals who come from near and far  share the same goal: to develop and bring out each person’s leadership skills by filling them with energy and instilling in them ethics, creativity and the urge to become forces of good instead of victims of circumstance.

The training programme, described as a “journey in five acts”, is a series of experiences intended to gradually prepare participants for the challenges of the real world. It starts in a virtual environment where participants will be able to test their social initiative in a risk-free setting. It ends in the field where, for five months, kanthari graduates will mentor each participant as they launch their own project.

Yellow kanthari is an indicator of innovation through new products, strategies, technology or concepts for social change. Olutosin Adebowale, in Nigeria, is piloting Trash to Treasure, which manufactures goods from recycled waste, transforming the lives of abused women.

Orange kanthari are social entrepreneurs who use their enterprise as a tool to achieve lasting social change. Ojok, from Uganda, was nine years old when a rebel soldier beat him over the head with a rifle. He nearly lost his sight but today runs a beekeepers’ co-operative and has already trained 40 blind people to make a living from beekeeping.

Red kanthari are activists who fight for a world free of discrimination, negative attitudes and harmful norms. Jane Waithera is a a person with Albinism. In Kenya, where she lives, albinos people with Albinism face difficult lives. Sorcerers believe that some of their body parts bring good luck bring good luck and this results in the getting killed. Jane works to put an end to these killings, fights for albinos’ rights and offers advice to people affected by albinism and to their carers.

Violet kanthari are artists who employ creativity and art as tools to make a difference. Sristi, who lives in Nepal, is blind. She is a dancer and uses her art, as well as fashion and adventure sports, to stimulate blind people and to change society’s perception of blindness.

Ever since kanthari started up some twelve years ago, it has trained 226 project leaders in 48 countries. More than 130 organisations now have a positive impact every day on the lives of thousands of people who are situated on the margins of society. Even though kanthari has a solid network, the health crisis has hampered its work. In these circumstances, Almayuda’s contribution, like those of all kanthari’s other patrons and sponsors, has proven to be invaluable.